The students will be participating in the Presidential Global Scholars Program, which focuses on study abroad. The program is not major-specific but designed to make students global scholars, according to its website.What this does is it puts a student in a situation where they’re uncomfortable, said Terry Papillon, director of the program and University Honors.If they’re going to be significant citizens internationally, they need to be comfortable with being uncomfortable.

The program will take the students to Riva San Vitale in Switzerland.We’re going to take students from all different 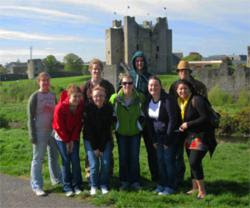 colleges and all different departments, and talk about things that are generally applicable to students who are going to be active citizens locally, nationally and globally,Papillon said.The discipline is honors.The classes will be taught almost exclusively by university distinguished professors, most recommended by University President Charles Steger.
I think the program is great because it has an all-star cast,said Harry Rosenbaum, a fifth-year architecture student.Rosenbaum went to Riva San Vitale in the past with an architecture program.

The honors students will live and study at Riva San Vitale along with a new group of 16 architecture students. With 48 Virginia Tech students in all, Papillon said he hopes to keep cultural problems to a minimum while in Switzerland and maintain the program’s reputation.Switzerland is a little bit more guarded, so it’s a little bit harder for American students to break into the culture of Riva San Vitale,Papillon said.It’s also a relatively small town so we try as best as we can to integrate the students into the community. But 48 students is a pretty big number for a town this size.

Chris Prohoda, a junior engineering and materials science major, said he is enthusiastic about being immersed in a new culture, and he applied even though he will probably be staying at Tech for an extra semester because of the trip.I’m excited to explore such a stunning country,he said.I love Europe.While Tech students have had one or two serious drinking-related incidents in Riva San Vitale in past years, Papillon said these were not unusual for a study abroad trip. Riva San Vitale poses the additional challenge of not being a very tourist-heavy area, where English is not widely spoken. It is located in the Italian-speaking part of Switzerland, so a local instructor will teach students Italian during the semester. Because this will be the program’s first year, there is no language requirement for students applying to go on the trip, but for future GSP trips, elementary Italian will be a prerequisite.

Paul Heilker, an English professor, is traveling with the group, and said he hopes to teach students to reach across cultural and language barriers. There’s a lot of talk of being a global citizen, but what does that mean?Heilker asked.Global awareness is one thing getting outside of your own cultural context, learning to speak across intercultural barriers.Heilker plans to accomplish this by teaching his students the communication skills necessary to reach out to all cultures, regardless of language.Instead of courses lasting the whole semester, students will take a series of two-week modules. The classes based on various disciplines, including science in a global context, writing, Italian, culture and leadership.

The modules will total 18 credit hours, and cover areas two, three and seven of the curriculum of liberal education.The modules will be directly relevant to Europe and where we are, said Kim Carlson, the assistant director of the program. We’ll be thinking about why these things matter to the rest of the world.In addition to Tech tuition, students are asked to pay around $3,000 for their own travel and other fees. It would put a financial strain on me, Rosenbaum said. But if students can make it work, I would highly recommend it.Financial aid is available via the education abroad office. Papillon has also been putting money aside personally for scholarships to ensure that any student who wants to go has the opportunity.
Posted by kkostan at 4:55 AM